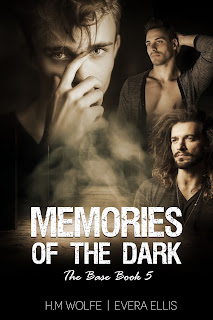 ❤️ Memories of the Dark is Live! ❤️
The Base Book 5 by H.M. Wolfe and Evera Ellis


Fergus loved his husband very much, but that love was twisted around and used against him until he was a shell of the man he once was. Only Everly, the fiercely protective man his mind created, was able to keep him from taking his own life. When his husband finally crosses a line, Fergus’s life hangs in the balance, and just when he thought it was over, two shining beacons kept him tethered to this world.


Dehaan lived a solitary life until he was taken in by the president of the Steel Riders MC. With his pharmaceutical knowledge, he began helping them to eradicate the potent drugs invading the city. Having been physically abused as a teenager getting close to someone else was difficult for him, but it didn’t stop his heart from wanting the son of the president, even though the man was more than he could ever take on.


Xavier had been a dominant for as long as he can remember, but he still has things to learn. The love for his best friend has been holding him back from finding his own happily ever after. Until he takes a chance and is rewarded with Dehaan’s admission of love. His protective instincts flare around his best friend and lover, but even more so when they find a man clinging to life in an abandoned warehouse.


Can their newfound relationship survive the addition of a third?

Dancing in the Dark (The Base, Book 1): https://smarturl.it/TheBaseDITD

I miss Everly very much, his courage, wit, strength, but also the sweet, vulnerable side he has. And I know you miss Fergus, the two of you experienced the same ordeal, and that brought you very close.” Xavier smiled, brushing off a strand that fell on Dehaan’s forehead, covering his eyes. “Things shouldn’t be complicated, you know.”

“Are you... do you want to include Fergus and Everly in our relationship? You should know by now that you can’t have one without the other, and I don’t think Fergus would be able to offer you... Sorry, it won’t work, no matter how much you and I wish it would. Things are complicated, whether we like it or not.” Dehaan put his head on Xavier’s broad chest, letting out a soft sigh.

“You know, Everly once told me you won’t know if a thing will work or not until you give it a try. He also said that using the right approach is the key to any successful enterprise. Are you ready to give this relationship a chance?”